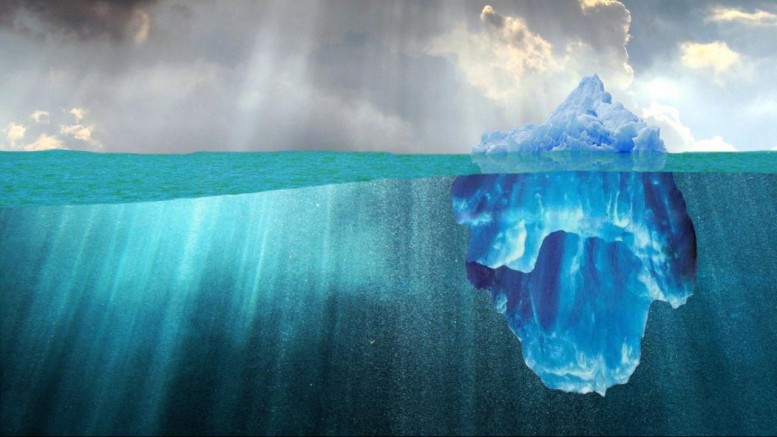 The Iceberg model of culture explains how cultures comprise of visible symbols above the waterline (translated into a business culture environment = offices, brand, logo, mission statements, free beers on a Friday, CSR, behaviours…) and a vastly larger invisible force below the water of the intangible stuff in a culture (= values, beliefs, leadership styles, perceptions of equality and diversity, meaning…). As with any iceberg, it’s the bit that’s hidden from view that we should be concerned about.

When many organisations look to evolve their organisational culture they go straight for the visible stuff thinking that if they get that bit right then the rest will fall into place. Yet the visible stuff is the easy bit – anyone can come up with a new logo, ethical ways of behaving, smart motivational posters, flexible Fridays, charity hook-ups and an open plan office layout. But it’s the invisible that gives meaning to the visible. Behaviours are guided by organisational values, beliefs and purpose, which should be deeply embedded in the psyche of an organisation not just paid lip service to.

Organisational culture is the manifestation of human behaviour and as we know human behaviour has this rather unpredictable capacity for both infinite good and bad depending on the example that is set. Look at Wells Fargo, Lehman Brothers or Sports Direct. All undone by behaviours their leadership promoted while their brand values said something else entirely. And it wasn’t the iceberg that sunk the Titanic, it was human behaviour. Behaviour guided by an organisational belief that the ship was unsinkable.

The thing with culture, as Peter Drucker famously said, is that it eats strategy for breakfast. But Drucker didn’t go far enough – badly managed organisational culture has the potential to consume everything in its path. Not just strategy but as we have seen, whole businesses. Culture is a crucial asset but when mismanaged it becomes a rogue agent. It should be as carefully and closely managed as any other critical part of a business strategy.

How to address this issue? Consider how to make every aspect of your culture wholly visible to everyone, nothing should be hidden. It’s a demanding task (and admittedly not always achievable, but bold aims and all that…) and it will shake out a whole load of skeletons but it will save you from accumulating a whole lot more. If you are part of a leadership team you need to hear the whole truth and nothing but the truth from your people (and customers) at every level of the organisation. You need to acknowledge the issues and you need to go deep into those layers of your organisational psyche to find the source. Question everything. Make the unsaid, said; the invisible, visible. Raise the iceberg. Build healthy, authentic, values-driven behaviour and use its incredible power to motivate, engage and drive the organisation forward. Brand as culture, culture as brand. Some still label this touchy-feely or nebulous. Management consultancies struggle to apply a model to it. Of course it’s slippery, it’s rooted in human emotions and behaviour. But anyone who thinks the emotional intelligence / capacity of their organisation has nothing to do with its performance is well off the game.

This all starts at home. By taking a good look in the mirror. Regardless of your “position” it falls on you to help define a healthy culture for your organisation. It has to be the purpose of every one of us to evolve the organisations we work in. If we’re not evolving, then really what’s the point? People have shrinks or coaches. Organisations need the same. Find someone who will hold the mirror up to you or your organisation on a regular basis. Once you accept that asking others for help is the best way to learn, you accelerate the process. The aim is to find congruency between who you are and the organisation you help lead. You need to define your purpose in order to define it for others. If you can’t make sense of what’s under the surface of your own personal iceberg, then the chances of you helping others to do it is slim. And as history shows us, if you hit the iceberg, the fall-out won’t just impact your bottom line, it will point the finger firmly at those in charge of the ship.

Roland consults, coaches and writes about organisational culture, leadership and innovation. If you enjoyed this, please share it and follow me on linkedin.